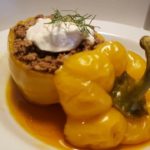 Preheat oven to 350F. In a cast iron skillet heat fat (e.g. bacon, lard, avo oil) over a medium heat (3-4). Chop the shallot and deseed and chop the jalapeño. Add to the skillet and allow to brown. Chop the fennel bulb, removing any hard outer parts. Add to pan and stir. When browned, add the pork. Brown the meat over medium heat, stirring occasionally. Season with salt and pepper. Add spices to taste. I used cumin, dark chili, chipotle chili, smoked paprika. I also added a dash of Worcestershire sauce after the second tasting. While the meat is finalizing, cut the tops off the yellow peppers and deseed the insides. Get your tinfoil ready. Scoop the meat filling into the peppers, put the lids back on and wrap in foil. I put mine in a bread pan, but you can use a sheet pan. Into the oven on 375F for one hour. Remove from oven, open foil--be careful, it's hot!--and serve with trimmings like sour cream, or yogurt, or just like that, and I added some fennel fronds for color and a burst of taste!

Treasure the Things You Love

Living Well Starts with YOU

Alcohol-Free is the Way to Be: All the...

What Will It Take to Admit We Were...

Videos from the CACR 32 House Hearing

Is DCYF Being Weaponized Against NH Republicans? (Manch...

"For me, the bottom line is: America is leaning towards a totalitarian, authoritarian police state and I don’t want that to happen, or at least not in New Hampshire." ~ Carla Gericke (Freakonomics, Ep. 259)

Playing around with some new apps. ...

Regardless of your vax status, we must stand together for humanity's sake. If you can, get yer butt to the Free State of New Hampshire! ...

Sprucing up my office bookshelf as I prepare for a highly productive year! I'm writing a book about quitting alcohol. Best decision I ever made! #freedomnomnom ...

Proud moment: 5 minutes at The Gauntlet at Hereticon to tell folks about how awesome the Free State Project is! ...

In repressive societies, no one believes anything the Regime says. I now apply the same rule of thumb to anything "fact checkers" say. Don't trust the opinions of apologists & paid propagandists... ...

I quit using the neurotoxin known as alcohol in 2017, but this still resonates for obvious reasons. I highly recommend eliminating alcohol, and finding your groove through mindfulness, meditation, and choosing a purpose-driven life. Make good choices in 2022; it's up to YOU! ...